I made a reference in my last post that could probably do with a bit more of an explanation.

I made mention that my life had been flipped, turned upside-down and never took a minute to sit right here and tell you why…

Our family changed.  We grew.

We added to our raggle-taggle band of misfits.

We adopted.  A kitten.

We had settled it between the three of us, we would wait until we got closer to the start of school.

Then we (the wee one and I) went in to the local pet store to pick up some cat treats.  For our existing cat.  And we instantly fell in love with one of the rescue kittens.  Like BAM!! And the next thing I know I am filling out an adoption application while the small human got acquainted with our (maybe?) new family member.  I texted the hubs to keep him up to date. We would be handing off that night (I wasn’t going to have time to explain that a lady from a rescue group would be contacting us with questions and possibly a decision regarding the kitten), so while the text was brief it was jammed full of info.

I received a call at work from my husband. He gleefully shared the news that we had been selected and were welcome to pick the kitty up the following morning.

We shared the news with our all our little guys. Only the wee human seemed to grasp what was happening, “we’re getting Rusty, really?!?!?!  Oh m’gosh!!” and with that he was over the moon.  This was going to be his pet. A real tangible friend that he could care for. So the next morning we were up early. We needed to outfit the addition with a few things (collar, bowl, litter box) and we needed to procure a baby gate to section off the new addition and let all the furbabies get properly acquainted.  I was especially nervous about the older cat. It had taken him nearly three years to warm up to the wee one and nearly a year for him to acknowledge the dog.

The first couple of days we kept the kitten contained in the wee one’s room.  It had been a recommended way to introduce to the house and we figured it would be good for bonding.  It was!

However, one night (or one very, very early morning!) around 3 am, I heard the calls of my son. I sauntered in to his room (making sure to brace myself as I hurdled over the baby gate) to find him sitting up in bed looking somewhat like I imagine I did when he was a few months old. The kitten was beside him. Mewing away.

“Mommy, parenting is hard work. Rusty keeps crying and I don’t know what to do anymore. I’m so exhausted I just want to sleep!”

“Oh sweetie, that’s okay. It’s hard to be a parent.  You don’t always know what to do.  Would you like to me stay, then you can go back to sleep and I will tend to Rusty?”

But he had already fallen back to sleep.

And I was now (officially) on duty. 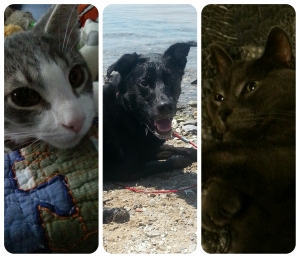 All the furbabies. (Far left) Rusty, our new addition, (middle) Toby, our trusty pooch, and (far right) Terror, the boss.

The nights have been as hot as the days.  There is no reprieve. WAH!

And I am still not sure about this working nights.  I am so tremendously thankful for my other work co-operating with my schedule.  But as I said before, I am wiped.  And this heat is NOT helping me at all.  Even said inside with the windows closed, the curtains drawn and the AC pumping I can feel it.  My chest is tight.  It is an effort to breathe.  And the old blood sugars seem to see all of it as an excuse to completely fuck me over.  Thanks Diabetes.

With the passing of this week, I will be half way through.  Half.  Way. Sheesh!

So Brother One DID have something to say about the Skype chat.

Thankfully (for him) I was not on the receiving end of his snarky comments.  But poor MG was.  Again.

Apparently Brother One is semi-warming to the idea of the kiddos getting together.  However his refusal to let go of things has him stuck in this stagnant “I still don’t understand what happened three years ago, so it is hard for me to move on” place.  Well, geez asshole, let me explain it to you – I got really sick, hospital sick, my heart was on the fritz; our bio mom was trying to convince my husband that I was nuts and he should take my baby from me while I lay in a hospital bed with a wonky heart and darling step-daddy was emailing saying what a selfish bitch I was, and you decided that you should just stay hell out of it all and not once did you ever get in touch (though MG tried, and was met with a cold response from us which we have since all apologized for and moved on from) – that’s what the fuck happened.

He and MG had a chat last week.  It was more positive than the previous ones.

I wish Brother One could grasp what a wonderful thing this would be for everyone involved.  Most importantly his daughter and my son.  The step-siblings all have children (between the three of them there are 7) though any family get-togethers with them (in the past, I cannot account for anything lately) were always superficial.  And, while Brother One grew up around them more so than Brother Two and I, I still do not believe that he is as close with them as he was with me.

Hopefully, Brother One continues to find reason and comes around.  Eventually.

I have been toying with the idea of contacting all of them.  Brother One, Brother Two and Brother Three.

For months now, actually.  But I have not yet decided what I am going to. Though I am leaning in a particular direction.  Dinner with the folks on Sunday helped sway me a bit.  Whenever I visit with my parents I am sure to inquire about Two and Three.  I do not do it to be nosy.  I am genuinely interested (because I care, though I am really starting to question why).  And I love my folks.  I know as much as it pains them to have me ask, it warms them that I care enough to.

Brother Two has been having a difficult go of things lately; one of his furbabies passed away and whispers on the wind say there are marriage troubles.  I feel awful for him.  No one deserves that.  Hopefully they can get through this little rough patch.

Brother Three moved back in with the folks and has gummed up our summer.  He still refuses to have anything to do with me and my family, so it takes masterful coordination to visit my parents or orchestrate a sleepover for the wee one.  Unfortunately, my patience is wearing thin with him.  More and more I am made aware that, perhaps, I do not want anything to do with him.

It has been long enough that I am no longer understanding of their hesitance.  No longer understanding of the anger (albeit unfair and unnecessary) that they carry towards me.  No longer understanding of why they would want to torture our parents with these asinine requests (holidays are substantially more complicated now than they were when One, Two and I were small children shuffling between households).  And while I may feel that way, I doubt it will make any difference.  The time is coming and I do not know that I will ever have room for them.  Besides, I get the feeling there is more at play then they don’t want anything to do with me because I stopped talking to my parents (which is none of their business anyways).  I think Two and Three are tremendous snobs with backwards beliefs and that won’t mix well with a sister who artsy-fartsy, opposed to consumerism and accepting of everyone.

So. Back to Brother One.

And, truth be told, even given our massive differences and disagreements, he is probably the only one worthy of pursuit.