And now we are in June.

Summer is fast approaching.  My mother-in-law will turn 70 this coming weekend.  And my wee one will complete his first year of school when the month closes.

Holy crap!  Where did the time go?  But that’s just it.  Time goes.  And too many of us try to bend it, change it, and catch it.  Seldom do we simply let it be.

We have been busy lately.  That explains (but does not justify) my lack of presence here in the form of posts and readership.  My apologies.  Hubby’s efforts and skills have finally been recognized and he started proper full-time hours this week.  YAY!!  Wonderful as that is, it does mean a few changes for us.  He now works Monday through Friday and leaves the house before 5:30 am.  No need to adjust our sleep schedule, we have always been early to bed, early to rise.  But I am now solo-parenting in the mornings, these last few weeks of school, then skipping off to other work or home to create artsy edibles for my clients.  There are several wonderful things that come along with this change, the wee one and I have special time together, hubby is home every night for dinner AND gets off work in time to pick the wee one up from school.

There have been a few other things keeping us busy too…

Last fall our neighbours adopted a kitten.  A gift for their child, who was turning three.  They had asked for a bit of advice (a running theme in our relationship with them) and we gave all we had.  Over the winter holiday season they were gone a lot, visiting family overnight, so we gladly looked in on the kitty.  We have tried several times since the move to be friendly with them as they are our contemporaries and have a child relatively close in age to our own.  But over time we have observed that they are very different from us.

I guess this little puss did not appreciate his new home.  According to the neighbours he was destroying the place.  We suggested toys, a change in food or treats.  Even gave them some of what we give our cat.  But as the weather warmed we started to see the cat outside.  They explained that they simply can’t contain him, he forces us to let him out.  To stop the cat from his reign of terror, they began leaving their back window open, allowing the cat to come and go freely… 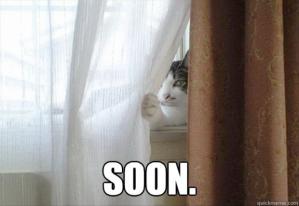 Obviously not the neighbour cat. And it was not as sneaky as this. They left their back room window open, without a screen…ANYTHING could have come in…

Until one day, the cat did not come back.

The child was quite upset (though they claim she barely cared) explaining to us that she really missed her kitty.  We listened over and over to their tale of woe.  And promised to do our best to help them located the lost pussy cat.  Twice hubby and I were fooled by an imposter.  But the third time seemed to be the charm.  We found the cat!  And promptly informed the neighbours.  Thanks were extended after the reunion.

But the cat didn’t stay in.

He was out MORE; they explained that once he had a taste for outside there was no way he was going to be an indoor cat.  However.  He was destroying my gardens.  I nearly lost a bee balm to his shitting in my flowers.  I had to put our pooch on guard, Toby you don’t let that cat come around here.  And then it started hunting the birds.  Our other neighbours too had noticed a decrease in the birds and an increase in cat sightings.

We moved here partly because of the wildlife.  We are on a migratory path and us bird nerds love it!  We chart who comes to visit and when.  We know the various calls of our regulars.  And look forward to those of our transient visitors.  One day we heard all the warning sounds, alert, alert – there’s a predator nearby, so we popped our heads out expecting to see a hawk or crow and found the neighbour’s cat lurking in our hostas.  So out went Toby…the cat ran off and, several minutes later, a few of the birds came back.  But their numbers never rebounded to what we all considered normal in the days that followed.

Then I found a dead bird.  So I politely explained that enough was enough.  And that we are not the only neighbours upset by this.  I went on to inform neighbour guy that by-laws state that while you can have a feline outside, you must be with it and it must stay on your property.  Perhaps, if he must be out you could put him on a leash?

And so, that pussy was tied up!

We never actually saw the cat on its leash. We did however see the leash left in a heap on their deck. According to neighbour guy the experience they had was similar to above and, apparently, even included a hung puss.

And the birds returned.

A few weekends ago these same neighbours cut down a mass of beautiful cedars.  Those trees provided a home to many birds, especially cardinals, and a couple of squirrel families.  As well as privacy for all of us.  They informed us they were doing this because they wanted more space to use their yard.  Really?  This from the people who leave weekend adventures in eating and drinking scattered all over for weeks on end (we returned home from our camping trip last year to hot dogs on sticks left around their fire pit and they stayed there for at least 2 more days, this from the folks who cut their grass this Sunday for the first time this year, this from people who in a week do not amass the hours out there that we do in a day…

The entire time they were modifying the cedars my wee one sat there stone faced.  Staring down two grown men enough to make at least one of them uncomfortable.  Neighbour guy apologized.  Other neighbour guy, who I am sure thinks we are uptight, simply brushed off the little guy and his concerns.

It looked awful halfway through.  When they should have stopped (I scavenged the castaways and managed to gather up enough of the bigger branches to completely edge my back gardens!).  But they kept going.  And it went from bad to worse.

Three days later neighbour guy jokingly remarked, I wish I could glue the branches back on…

We, along with the neighbours on our other side, wondered how long it would take to clean up the mess.  We joked that it would probably take a week.

Last weekend we had the little neighbour girl over.  She and the wee one were playing in our yard having a grand old time, freezies, the see-saw and loads of giggles.  But then the little girl said something to hubby, don’t tell Mecca (I am Mecca – she has a difficulty saying my name so last summer we left it as Mecca) mommy let the kitty out.  Hubby is genuinely hard of hearing, but dumbed up this time so he could be sure of what he heard, don’t tell Mecca mommy let kitty out!

Gotcha.  I am the big, bad neighbour lady.  Okay.  Make me the problem.  That’s totally fine with me. 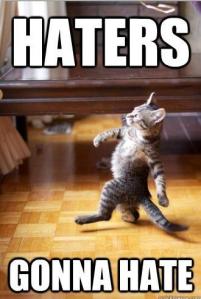 I am no prude.  But I like rules.  They are there for a reason.  As a T1D my life revolves around regime.  But even as a youngster I was a stickler for the rules.  Guess that could explain the wee one’s affinity for order…

Friday night, after listening to neighbour gal complain (as usual) about everything (her life is SO much harder than everyone else’s) all day long, neighbour guy came out while we were sitting on our porch and said, just to let you guys know the cat got out.

Here is a snippet of the conversation that followed:

Me – Oh, I am allowed to know that the cat is out?

Me – Well, on a couple of occasions your daughter has expressed that I am NOT to know if/when the cat gets out…

Him – Oh well, I have never said anything like that.  Maybe her mother did.  Sorry.  You know we’re cool about keeping the cat in, right?  Like, I don’t want him killing birds either.

Me – It would appear that not all of you are okay with it, and if you want to make me the bad guy that’s fine.

The three of them were over at their neighbour’s house.  We once again found the cat.  Hubby sent a text.  Then another.  Then a phone call.  No answer.  Several minutes later, they all returned and we alerted them before they waltzed up the stairs, he’s sitting in the corner on the porch, to which neighbour guy replied, oh you called me?  He marched straight in with their little one in his arms, while neighbour gal struggled to put down her tall can and scoop up the cat, then followed neighbour guy in to the house.

Hubby and I exchanged did they really just stumble into the house and NOT say thank you looks.  A moment later she returned, and we sighed with relief thinking well at least they’re not manner less loogans, grabbed her can, muttered something about her hard life and fell back in to the house.

One thought on “Nature vs Idiot(s)”