Thank you. Thank you to those of you who read (or just follow) this blog.

I do not pay much attention to my stats (maybe I should) but I must admit, a wee glance at them and seeing those columns of varied shades of blue does give the old confidence a boost. And, for someone like me, who doesn’t track those stats or really even understand them, the fact that anyone even shows up here makes me grateful.

Unfortunately (or fortunately!), for those who find something to read here, I do not blog with set regularity. That said, there will be a lull over the next couple of days. I will not be able to post. With good reason: we are off on a mini-vacation. A family adventure. Camping.

A couple of months ago we received a phone call. Caller ID reported it was my parents. I wonder what’s up? It was my dad. He was at a campground, owned and operated by my mom’s cousin. Would we be interested in a rented trailer for a couple of days of camping? OF COURSE! He wanted to know what would work with our schedule (more importantly, hubby’s work schedule). Quickly we pulled out our electronic devices and took down the calendar for a look; we found something that worked all around. Eep! Very exciting.

We used to camp all the time when I was younger. My family travelled to various places each summer until we set up permanent weekend residence at a park in New York. Each weekend we would pack up and cross the border. It was a fun place for a kid. There was a pool, a park, an arcade, a store and Saturday night Bingo. I can remember being in-charge of the troop consisting of all the kids. On Saturdays my mom would feed us all early. In time to make it to the first call of the night’s Bingo festivities. We would all wander over to the pavilion. Dimes in tow. And give the adults the chance for a child-free meal.

Post Bingo we would wander back. Sometimes picking up a few stragglers along the way. It was camp fire time. Which meant snacks, fairy dust and stories. I can remember the small wooden bowls filled with a mix of popcorn and chips. Once all the kids were situated (including the few we picked up and the others who happened by) Mom would shake a bit of fairy dust on to the fire. Let the light show begin – it was a pretty spectacular event for a kid. All those colours. Flashes of light. But what everyone was really there for had yet to occur. 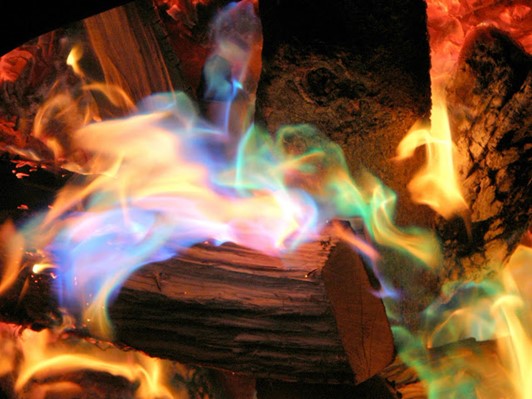 That’s how the story goes…

I can remember one particular weekend away, I think it was summer. We used to camp at the park from May to October. But I am almost certain this was a summer weekend.

It was Saturday night. Bingo was finished. At least, for us kids. The grown-ups were tidying up from their meal and we were all organizing around the fire. There were some extra kids tonight. Our chairs were filled. Some kids had brought their own. Those who did not perched up on the picnic table. It was a full house. Well, a full fire? Anyways, children and adults alike were poised and ready. It would begin soon.

Camping in the same place each weekend allows you to become part of a community. The park community. That campground offered permanent spots and occasional sites. While there was an influx of campers throughout the season there were also the regulars. Because of that, everyone gets to know each other pretty well. My dad had become park famous. All the kids knew our campsite. They would beg their parents to come over on Saturday night. They came for the stories.

My father is an epic storyteller. He is able to captivate and hold an audience. He has flare and excellent timing. And all the kids knew it. So did their parents. Each year as the summer crept on the crowd at our site grew. More kids. More parents. My father had a handful of tales he would rework or elaborate on, and sometimes he would get help.

On this particular weekend there was a larger than normal group around the fire. Eager ears forced the kids to the edge of their seats. Darkness had moved in and we were now reliant on the fire for more than ambiance. It had been a warm day. We had spent it swimming. And there was evidence hung from the line. Towel after towel along the clothesline. From trailer to tree. Like a wall. In front of it, a picnic table full of kids. Dad had a signature story, The Thumping Heart. And it was one of those stories that you can’t help but want to hear even though it creeps you right out…thump-thump, thump-thump…

During this telling of the tale, our fellow camper and family friend snuck off. I am sure everyone assumed Jim had popped across the lane to grab another beer. That is, if anyone even noticed his absence. A short time later there were screams and squeals. And children running everywhere! Jim had snuck out of our site and gone across the lane (likely grabbing a beer) before looping around the back of our trailer, where he waited. And waited. Until that moment in the story when he burst through the towels on the line and scared the shit out of nearly everyone there!

Camping is sure to take a slot or two on my #100happydays. But I have reached a dilemma. I have noticed some people do not post each and every day. Occasionally posting the day after. I have been able to post each and every day for close to thirty days now. Never missing a day. We do not have data packages on our mobiles. My internet access is Wi-Fi dependent. And we are not sure there is anything to link in to at the campground. If not, how will I post?

I am toying with the idea of turning on my data plan and paying the fees for briefly tapping in because I am determined to do this. Every day. Plagued as I have been by this I think I have reached a decision. I think. I have really enjoyed doing this #100happydays. And I would be pretty disappointed if I didn’t try to find a way to be consistent.

We had dinner at my parents’ house last night. Picked up Nana and headed over in the later afternoon. We enjoyed a lovely visit, and an exquisite meal (thanks Mom!). My folks live on Lake Ontario. It is hard to keep the wee one off the beach. He is a big time rock collector. And he’s four. So throwing rocks and sticks into the water is also thrilling. Last night it was just hubby and I that headed down to the water. While checking out all the landscaping my father had done recently I spied a piece of driftwood on the shore. Oh hubby!! I had to have it.

So Big Joe through on his shoes and sauntered down to the water with me. I offered to help but he didn’t need it. Even though the piece was nearly as tall as him. He hauled that sucker up from the beach, across the backyard, up the hill and placed it in the back of our car. Phew.

Near the end of our visit last night – and after much skirting around – my father announced he is fretful for the holiday season. Middle of July and my dad is worrying about Christmas. Oh dear. My father is terrible at hiding his emotions. Both hubby and I could tell something was troubling him when we arrived. And just before leaving, we found out what that was. The issue: my folks are hosting the family dinner this year. What’s the big deal? It means that they may have to celebrate without their grandson. And their daughter. You see, Brother Two and Brother Three will (obviously) be invited, as will the rest of the family, but should they accept that invitation it means my family and I will have to give it a miss. Since my brothers refuse to be in the same room as me.

I am okay with that. I do not really want to be in the same room as them. I am growing very tired of the whole situation. I am tired of shouldering all the blame. Blame for things I do not even think I should be held solely responsible for. People forget that I was young once too. I cannot always be reminded of the hurts I caused as if I suffered none. I cannot always be told there is nothing more to be done when I have never asked that anything be done in the first place. I cannot live in the duplicity of all the double-standards.

We told my folks not to worry about the holidays (and we meant it). We were happy to be home at our house on Christmas. My mum-in-law is slated to come. And it would be nice to spend the whole day at home. We moved in to our new place a couple weeks before Christmas last year, and went to my aunt’s for family dinner. So it is no big deal. But it is. To my dad. He has himself all in a tizzy. He doesn’t want to end up alone on Christmas. Brother Two never comes to any family events. Apparently he prefers to do all of that with his wife’s family. Brother Three may or may not come, a decision my father fears will be made in haste. Too close to the actual day.

I am obsessed with organization. I have always been organized, even as a kid. But my list making and constant revisiting of things worsened after my DKA episode. Luckily, the only damage (aside from that permanent damage done to my organs) was some memory loss. And while some memories have returned, others are lost. Possibly forever.

The problem with my memory is it isn’t totally mine. Much of what I remember are things I have been told by others. Sometimes I struggle with this. I am not sure if I am remembering the actual event or someone’s recollection of it. My second hand memories. Because of this I fiercely hold on to the ones I recall. My authentic memories.

Anyways. The lists are made. There are sure to be more. The packing is done. And there will be more of that.

And fun. There will be loads of that. I am sure.