Yesterday I went to have some ink work done.

It was Tattoo Wednesday.

I am in the process of having a beautiful sleeve completed on my right arm. It is a nature theme. Gorgeous flowers. Small birds. Insects. All the things I love in and about nature. It is very feminine. I adore it.

My girlfriend is my tattoo artist. We met a few years ago through a friend of mine from high school. I had some ink done on my back. Basic Kanji. I wanted something to tie it all together. I wanted a cherry blossom tree. My friend put her contact information in my hands. I put it to use. Nearly four years later, my collection of ink has grown immensely. And, I gained a friend. A marvellously talented and beautiful friend. For the last few years I have been her canvas. My back. My calf. My neck. Now my arm.

Each piece a meaningful masterpiece.

I AM NOT A FREAK 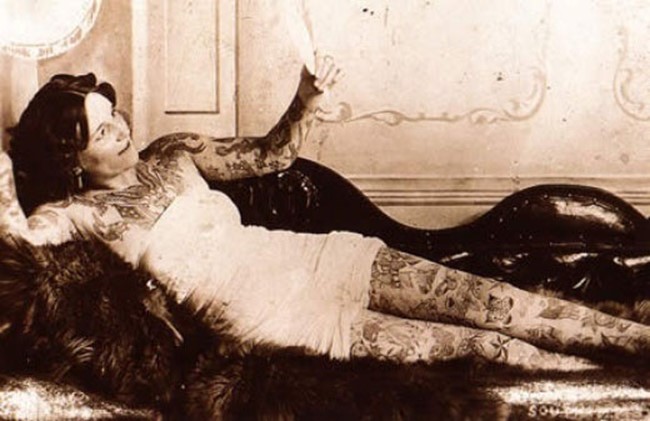 Many women with tattoos (and some men) in the late 1800s and early 1900s were a part of freak shows and circuses.

According to Wikipedia (and my own knowledge gained through accumulative research over the years), the practice of tattooing has a long history. Been around for many millennia. Practiced in several different and varied cultures across all the continents. And for several reasons.

Early 18th and 19th century tattoos were typical of military personnel. As much as they were a form of self-expression they were a means of identification. American naval papers and protection certificates were chronically forged. Because of this descriptions of tattoos and scars became part of the certification process. Official certificates would have descriptions and illustrations of the tattoo or scar. By doing this the certificate carried on their person could no longer be easily duplicated. Sailors began getting inked as a unique way for their body to be identified should they be lost at sea or impressed by the British navy.

It is said the modern era of tattooing arrived in the western world between the 16th and 18th centuries through seafaring explorations. Likely because of interaction between explorers and the Polynesian cultures they encountered. As they arrived home from these expeditions with tattoos it was absorbed into mainstream culture. Sort of.

People with tattoos have long been considered unusual. Especially women.

Janis Joplin’s outer wrist tattoo is a symbol for the liberation of women. She also had a small heart on her left breast.

With the 1970s came mainstream tattooing. It started to cross social boundaries. It was more commonplace. And it became regarded as an art form. Deservingly so. An unbelievable and never duplicated talent, Miss Joplin was tattooed before they were considered cool. In the 1970 she was tattooed by the legendary artist Lyle Tuttle. She proudly displayed her tattoos, saying on the Dick Cavett Show and in other interviews, “See, the one on my wrist is for everybody; the one on my tit is for me and my friends.” My kind of gal. I wonder if she would have gotten more…

My tattoos make me feel pretty. More comfortable in my skin. More than any article of clothing or make up or hair style ever has. They make me more ME.

Now in the 2000s tattoos are a lot more mainstream. A lot more accepted. Though not everyone feels this way.

Some people think it a meaningless form of self-expression. Something exploited by poor decision making and immaturity. Something that will creep up and unleash a world of regret. News flash: you can have tattoos removed. The permanency issue no longer exists. Other people think it is an art form best reserved for reprobates and criminals. Not so.

According to www.statisticbrain.com about 14% of the American population has at least one tattoo. That is roughly 45 million people. For my age group, the 26-40 year olds, that percentage is a lot higher: 40%. While we are seeing an increase in women with tattoos they are still more popular with men.

There are people who stare. People who harshly and publicly judge. Trust me. I have seen and heard it all.

It was summer, so I was wearing a basic tank top and shorts. I was with my husband and wee one (who was nearing 3 ½ at that time), when a woman behind me grabbed her daughter and very loudly said:

Don’t be like what? A university educated woman? A confident and well-rounded person? An AWESOME mom (that’s what my kiddo says I am)? A wicked wife? An artist?

I’ll say it now, because I didn’t then: FUCK YOU.

I am sorry the cherry blossoms peeking out on my shoulders were so offensive to you. She should see me now!

As I said, my hubby and wee one were there too. Both were upset beyond sensing my disappointment. The big guy was pretty seething. But he behaved. I could tell he was trying hard to refrain from either verbal or physical retaliation. My son did not. He simply burst out:

Mommy you are so pretty and I love you SO much!

And accompanying that was one of THE greatest hugs I had received to date. Many more have followed. I do not think she heard him for two reasons. The first, she quite literally grabbed her embarrassed teenagers (I mentioned the daughter, I would guess the young lad was her son) and ushered them WAY around us. You know. Don’t get too close to the tattooed people, their tattoos may jump off. Attack and ink you. The second reason being that while my son spoke with passion he lacked the necessary volume. A+ for effort.

Would now be a good time to mention that my hubby has virgin skin? He has NO ink whatsoever. Sorry. Just thought I’d make you aware of that. J

And I know she didn’t hear me when I bent down and whispered in my little ones ear, please do not be like her.

I was hell bent on black and grey. NO colour. Half way through she convinced me to let her add some pink hues here in there. In the flowers. She still wants to put more colour in it. All these years later. It makes me giggle. I love the piece and she knows. It is her art and she wants to refine it. I get that. When my arm is done. That’s where we are going next. Back to the back.

I love that tree. Even though I almost never see it (AND, I totally just giggled to myself, so <insert nerdy laughter here>). I have grown so much since then. The purpose of that tree was to anchor myself. Define who I am to myself. Not in a need to prove something way. Just an anchor. Better yet. Roots. I was grounding myself. It coincided with my absolutely conscious decision to figure out who I was. Who I wanted, needed and should have in my life. What I wanted out of life. It coincided with my decision to fully and completely life live in colour. To stand in the light. To come out from the darkness for longer than one day at a time. You know. A bunch of stuff. A big garbled mess of stuff that I spent one whole year sorting through. Anyways.

Every piece since that first one has been in colour. LOTS and LOTS of colour.

I have my black and grey moments. But they are mixed in with the colour. And there’s enough colour that you almost don’t notice.